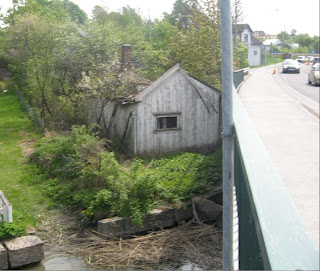 Norway is a neighbouring country with which the inhabitants of the western part of the British Isles have been entangled since Viking times, but about which they know little.

Rich in oil and gas, with one of the highest standards of living in the world, increasingly multi-ethnic, a transformation which is bringing its own strains, it has long outgrown its roots as a country of simple farmers and fishermen, and its buoyant service orientated economy now offers employment to many Swedes, who were formerly the dominant people of Scandinavia.

Although I feel, probably mistakenly, that I know the country well, this was my first experience of Constitution Day. 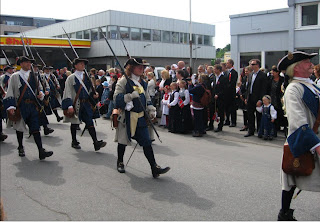 I had expected the procession of brass bands, school children and traditional regional costumes, but I was surprised by the large number of spectators wearing suits and ties. 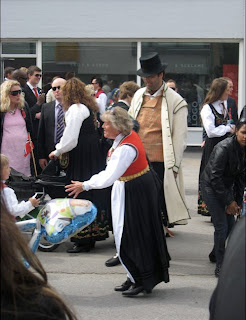 I cannot conceive of any national celebration in the UK in which people would turn out on the streets wearing what used to be known in my youth as "Sunday best."

So what's this May 17th all about?

In 1814 Norway was ceded to the Swedish crown by Denmark, which had been on the losing side in the Napoleonic wars. In an effort to avoid the loss of Norway, the Crown Prince of Denmark-Norway, Christian Frederik, the resident viceroy in Norway, called a national assembly. This assembly produced a constitution, a very liberal document for its time, which was signed on 17th May 1814.

The constitution eschewed the republicanism of the United States and created a constitutional monarchy, with Christian Frederik as the first King. The lack of international backing, particularly from Great Britain, sealed Norway's fate, and after a very short military campaign it bowed to the inevitable: Christian Frederik abdicated, and the Storting unanimously elected Charles XIII of Sweden as King Charles II of Norway.

With minor amendment only the constitution remained in place after the acceptance of the Swedish King, and so it remained after the attainment of full independence in 1905, accomplished by the deposition of the Swedish monarchy and the election of a new King and Queen, Haakon VII, formerly Prince Carl of Denmark and Iceland, and his wife, formerly Princess Maud of Wales, grand daughter of Queen Victoria, cousin of Kaiser Wilhelm and sister of King George V. It is then the oldest single document constitution in Europe, second only to that of the United States in the world as a whole. I can understand why, in a fast changing and often bewildering world, it means so much to Norwegians.

For anyone interested The Foreigner , an English language web site for non-Norwegians living in Norway, provides an interesting perspective on the country, and an excellent account of the historical background and meaning of the 17th May celebrations.

Posted by John Tyrrell at 08:22 No comments:

That Wedding: Britain at its battiest 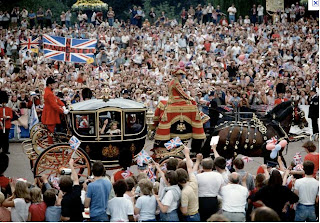 As a non royalist, and one of the majority of the people in the UK who neither watched the Royal Wedding on television nor attended a street party, I was interested to read an account of the event in Britain's best newspaper.

Dominating the front page was a rather mocking article by Matthew Engel:

Royal theatre captivates the world
and, in smaller type,

Sealed with a kiss A near perfect day as globe tunes in to see Britain at its battiest - and best.

"On one level, the event was absurd: yet another wedding in a family whose marital failure rate has lately been much worse than the national average. But it was also a demonstration of what Britain - and only Britain - can do. Only these royals can turn a domestic rite of passage into a piece of global theatre."

"The service was rather more God-centred than is now generally the case at British weddings, and at an hour and a bit, a touch long for modern tastes, especially for the early birds inside the abbey, some of whom had been there for nearly three hours before the ceremony began."

and, after the ceremony,

and speaking of the crowds who thronged the route to Westminster Abbey:

"They might just as easily have been here to celebrate a sporting triumph or protest against the Government. But though the British are a touch short of bread, they have been granted a most glittering performance by the glorious and long-running circus that is royalty."

In the middle of the same newspaper Simon Schama put the event in historical context: after the first world war and the fall of the Berlin and Petrograd autocracies, their relatives in London, newly renamed as the thoroughly English "House of Windsor", reinvented themselves and embraced the new world of mass entertainment. Royal celebrations became far grander than before, and "Royal Weddings, unseen in Westminster since the 14th century, became a feature of the calendar." So the young Prince and his bride never had any chance of the small wedding in an Oxfordshire village which was apparently their first choice.

Finally on the back page of the newspaper the Lex Column provided a wonderful tongue in cheek article extolling the business acumen of the mother of the bride: a descendant of labourers, messengers and clerks, she got her foot on the first rung of the ladder of business success by marrying into the minor gentry; she then invested heavily in public school fees (Marlborough) and a flat in Chelsea, sent her daugher to the same University as the Royal Prince, and even sent her beforehand to Chile, which the Prince himself had visited a few months earlier, "to give them something to talk about".

The article concludes, "This is a union of souls made possible by textbook planning: spotting an opening, then pursuing it with resourcefulness and determination. It belongs in the McKinsey Quarterly as much as in the pages of Debrett's."

The family internet business has not surprisingly flourished in the wake of its Royal connections. So, whatever the future holds for the House of Windsor, that of the House of Middleton looks assured.

And what is Britain's best newspaper? The Guardian perhaps, with its tradition of nonconformity and anti-establishment liberalism? The Independent, whose stance on major issues so often chimes with its title? Whilst these are indeed fine newspapers, the one of which I speak is none other than the Financial Times. I found it interesting also that Bagehot, writing in that other bastion of free market orthodoxy, The Economist, declares himself a compassionate republican, and thinks it is time to set the Royal Family free .

Anyway, all the best to the happy couple in the strange lives on which they are embarked.

Posted by John Tyrrell at 13:36 No comments: