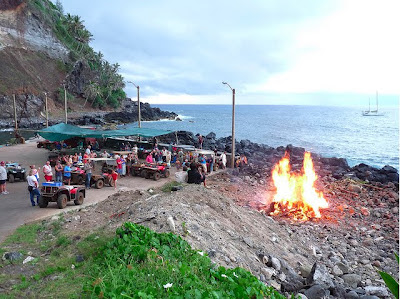 "Burning the Bounty", Pitcairn Islanders with quad bikes, January 20th 2012
This week my wife and I had lunch with fellow blogger John Grimshaw, an inveterate traveller to remote places who lives not far from me and whom I would never have met but for the internet. Earlier in the year he had sent me an email from Pitcairn, and we were eager to hear about the Island and to look at the excellent photographs,now on Flickr, taken by him and his wife Pauline.

He has also kindly given me permission to reproduce a few of them on here. 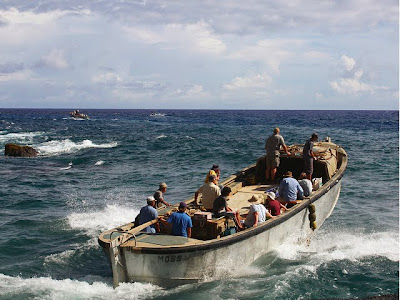 Pitcairn Islanders setting off on a fishing trip in a Longboat
Between February 1983 and August 1992 The Royal New Zealand Air Force made several 6,600 mile round-trip flights to Pitcairn to airdrop mail and cargo. 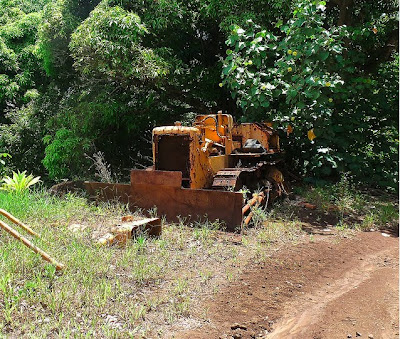 The island generates some of its income by selling commemorative stamps. A number were issued to commemorate the New Zealand Air Force flights. The cover below is from the last airdrop which took place in 1992 . 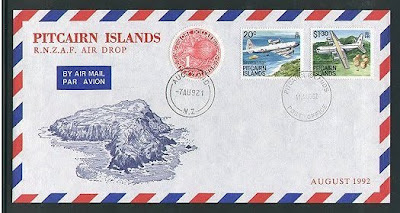 In my search for information about Pitcairn I came across the nearest thing to a newspaper that an island of 40-50 inhabitants can support, The Pitcairn News, bearing the banner UCKLUN TULL UN DEM TULL.

On reading further I was surprised to find that Pitkern, the language shared with Norfolk Island where the Pitcairn islanders moved for a time in the nineteenth century and where the majority remained is, despite the geographical location of both islands, considered an Atlantic rather than a Pacific Creole. (1)

I was fascinated to read the following account in Pitkern of the celebrations of Bounty Day in Wellingon, New Zealand in January 2009.

Wen we wake up Sunday morning rainen like a brute. We sort des day gwen be es hairy putty and gwen lucky ef eny bordy tun up. Den wen mussa time fer go har sun come out un shine like a goodun but mite be putt some sulluns orf cos nor get mussa as much ucklun es hem tadda time. But still gut plenty ucklun compared to Pitcairn. Fer me, mussa es sad un fer see how much ucklun out ya tekken part knowen orn Pitcairn we car play da kinds of games we bin el lorng ago, cos we nor gut nuff folks levven home now. But es goodun ucklun out ya involven dems sulluns un dems sulluns sulluns in our celebration un culture.

So remote and with such a small population, Pitcairn is obviously a very vulnerable community keen to improve its image and to promote itself: in August 2012 a number of Pitcairners will be attending the 2nd International Bounty-Pitcairn Conference at Pacific Union College in the Napa Valley, California.

Pitcairn honey, "with all the natural sweetness of tropical fruits and flowers", has reputedly become a favourite of the Queen and the Prince of Wales. So if I get an invitation to the Palace I will know what to take along as a gift!