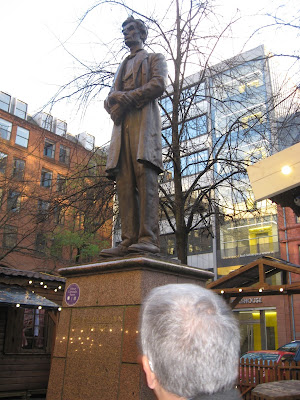 The Lincoln Statue in Manchester, surrounded by the European/German Christmas Market

Close to Manchester Town Hall is a place now known as Lincoln Square, in which may be found George Grey Bernard's statue of Abraham Lincoln. This statue was given to Manchester by Mr and Mrs Charles Phelps Taft of Cincinnati in 1919.

A copy of a statue in Illinois, it was originally intended for London, but the rather bucolic depiction of Lincoln with stooped shoulders, shabby clothes and big hands and feet was apparently considered by some to be grotesque and defamatory, so it ended up in Manchester! (1) It is inscribed "in commemoration of Lancashire's friendship to the cause for which Lincoln lived and died, and of the century of peace among English-Speaking peoples."

The statue was moved from Rusholme to its present place in the 1980's, and inscribed on its base was Lincoln's famous letter thanking the Working Men of Manchester for their decision to boycott southern cotton and acknowledging his awareness of "the sufferings which the working-men of Manchester, and in all Europe, are called to endure in this crisis". Unfortunately the wording of the letter was changed to "working people", a reflection of the political sensibilities that governed Manchester in the 1980's! 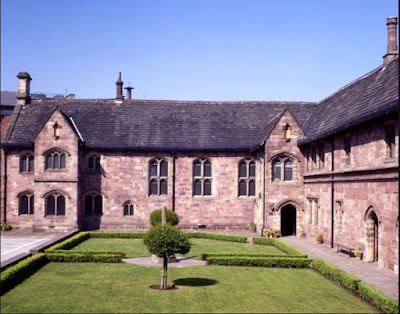 Within walking distance of Lincoln Square is a fine medieval building that has since 1653 been the site of the oldest free library in the United Kingdom. Most Mancunians are probably unaware of its existence. It is an amazing place, dark and mysterious, it contains thousands of old books and manuscripts. On my last visit an original copy of Vol II of Samuel Johnson's Dictionary (1755), the oldest in the English language, was displayed on the table in the reading room.

Chetham's Library will always be associated with the two German exiles and political radicals, Friedrich Engels and Karl Marx. Engels spent may years working for the family firm in Manchester, and wrote his Condition of the Working Class in England during his first stay in the city. On many occasions Marx came to see Engels in Manchester, and was a frequent visitor to the library.

Marx greatly admired Lincoln, whom he called "a unique figure in the annals of history" and he regarded the proclamation abolishing slavery as the most important since the establishment of the Union. Marx appeared to think that the US pointed the way for the rest of the world: there "ordinary people of goodwill can accomplish feats which only heroes could accomplish in the old world". (2) 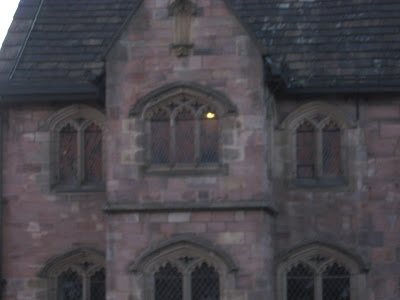 Chethams Library, A Light shining from the window where Marx and Engels used to sit

Marx was devastated by Lincoln's assassination, and wrote an uncharacteristically emotional letter on behalf of the International Working Men's association to the new President, Andrew Johnson, describing Lincoln as "one of the rare men who succeed in becoming great, without ceasing to be good." (3) 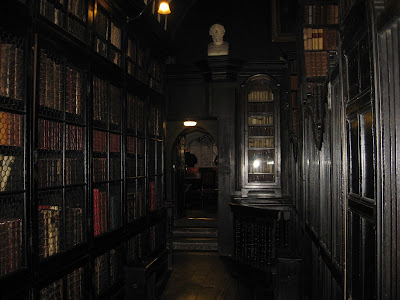 Marx's admiration of the first US President from a Republican Party which was to become synonymous with global capitalism might seem surprising. But in the aftermath of the failure of the 1848 Revolutions many radicals, from Germany in particular, fled to the United States and were active in the circles in which Lincoln moved in Illinois. Lincoln himself was also an avid reader of the radical New York Tribune to which Marx contributed a number of articles. (4) Curiously enough though, Marx's own brother in law, Edgar von Westphalen, himself an early follower of Marx, actually fought on the side of the Confederacy during the Civil War! 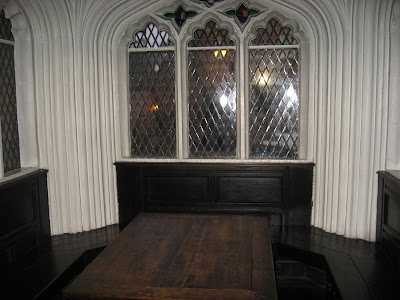 In 1864 the International Working Men's association sent Lincoln a letter, drafted by Karl Marx. The letter congratulated Lincoln on his re-election, and indicated Marx's own view of the place of the Civil War and the struggle against slavery, in world history:

From the commencement of the Titanic-American strife the workingmen of Europe felt instinctively that the star-spangled banner carried the destiny of their class .. The workingmen of Europe feel sure that, as the American War of Independence initiated a new era of ascendancy for the middle class, so the American Antislavery War will do for the working classes. They consider it an earnest of the epoch to come that it fell to the lot of Abraham Lincoln, the single-minded son of the working class, to lead his country through the matchless struggle for the rescue of an enchained race and the reconstruction of a social world.(5)


There is of course no statue of Marx or Engels in Manchester. In the Town Hall though may be found a bust of Oliver Cromwell, a regicide, admired by radical Liberals in the nineteenth century, and there used to be a statue in the city centre, now located at Wythenshawe Hall, over 6 miles outside the city. Its presence horrified Queen Victoria when she visited the city.

Posted by John Tyrrell at 06:10 No comments: