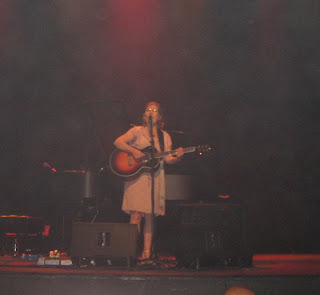 Most of the music you hear on the radio today is developed for making money. It doesn't feel true or honest. You can feel it in the music. - Iris DeMent
An idle google search two or three weeks ago was the first I had heard that Iris Dement was making one of her rare trips to Europe, on this occasion to Perth in Scotland. I had never had the chance to see her on stage before, and despite the long distance I knew I had to go

Normally when I tell people I like Iris Dement they say "Iris who?", so I was very surprised that my neighbours had not only heard of her, but were keen to accompany me.

So, early in the morning, the awful events in Norway from where I had returned a few days before still playing on my mind, the three of us set off on the 260 mile journey across the beautiful countryside in northern England and the Scottish borders to arrive in time for the afternoon concert.

We were not disappointed. After what seemed a rather diffident start, almost hiding behind the piano on what she pointed out was a sloping stage, Iris seemed to gain confidence and composure, took up her guitar, came to the front of the stage and sang as only she can, her songs interspersed with amusing comments about her family and her life. The audience loved her and was reluctant to let her leave.

It lifted me in a way I had not expected, and I wondered how my wife, unavoidably absent in Norway, who finds Iris "too depressing", would have felt had she been there, as she loyally informed me she would have been had she been at home!

The concert included Iris's emblematic, "Our Town" and the first song I had heard her sing on the radio a long time ago, "Let The Mystery Be", here shown in a recording made some years ago:

Apparently Iris originally thought that this was, by her standards at least, a happy song, until a number of people told her that they would like to have it played at their funeral.

I appreciate that Iris Dement is an acquired taste, and I have tried to analyse why I respond to her in the way I do. Firstly I note the influence she ascribes to Johnny Cash and Bob Dylan, two of the all time greats that are among my favourites. I also understand and very much relate to the deep and enduring influence of her now rejected evangelical Christian childood, which has been a part of my own life's experience.

But the words that immediately spring to mind are vulnerability, intensity and honesty. I imagine that she is not one of those people who have to be the centre of attention. When she sings she bares a little of herself, but remains a very private person. She is not I think a natural performer, and to my mind all the better for that. I realise now that when she refused to go on stage in March 2003 she was not primarily making a political point about the Iraq war, she was simply so upset that she felt unable to perform. Splitting hairs perhaps, but a truly political performer would have taken to the stage and used the occasion to her advantage.

Maybe I spent more time dwelling on emotions than some people, and maybe that's why I ended up writing. - Iris Dement

This selection of quotations attributed to her somehow confirmed the impression I had formed from listening to her music. I hope she soon returns to the United Kingdom or, "Haste ye back" as the Scots might say.

Iris Dement obviously sent me to bed happy. Soundly asleep in my hotel, I was awakened at 1.00 a.m. by voices outside my room and a knock on the door. I soon realised that my pyjamas were wet, and further inspection revealed a large very wet patch on the unused side of the double bed and water dripping down from the ceiling in a number of places. Apparently there had been a fire in the room above, the alarm had gone off at 12.20, the firemen had put the fire out, and I had slept through it all! I wonder how I would have reacted had I been sleeping on the other side of the bed! A memorable first visit to the fine city of Perth in every way. 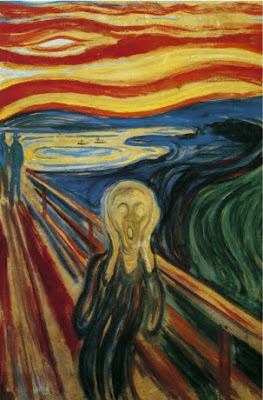 "I call my cancer Rupert" 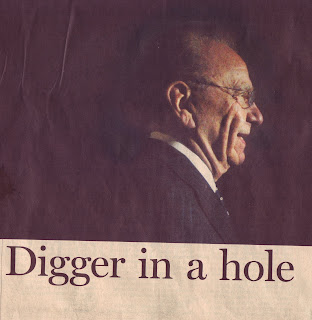 As a writer you will know that one of the favourite fantasy plots is where a character's told you've got three months to live, and who would you kill? I call my cancer Rupert. Because that man Murdoch is the one who, if I had the time (I've got too much writing to do)... I would shoot the bugger if I could. - Dennis Potter, 1994

As the events surrounding the hacking scandal at the News of the World, News International and Rupert Murdoch have unfolded in the past week, I have thought often about that last painful interview that playwright Dennis Potter gave to Melvyn Bragg shortly before his death in 1994.

In it Potter spoke passionately about Murdoch's responsibility for the pollution of the British press and political life.

Just exactly what Potter was warning us of has now become clear, perhaps even to our politicians who have cravenly allowed an American citizen who pays no UK taxes to become the most powerful person in the land.

Throughout the Blair years there were regular, usually secret meetings between Prime Minister and Media Mogul.

In 2003, when Tony Blair was agonising over the decision to take the UK into a war in Iraq, without a UN reolution, and against the wishes of the majority of the UK population, he spoke on the phone to Murdoch three times in the ten days before the invasion. Murdoch's news organisation, and particularly Fox News in the US, was of course the major cheerleader for the Iraq invasion.

If anything the Murdoch Cameron relationship has been even closer, based on social relationships, particularly with Rebekah Brooks, former Editor of the News of the World, and the appointment of her predecessor, the now disgraced Andy Coulson, as Cameron's communications director. Their efforts were crowned by the announcement in 2009 that after 12 years of supporting Labour, the Sun was switching allegiance.

In 2010 when David Cameron was elected Prime MInister lo and behold one of his first visitors at No 10 Downing Street was Rupert Murdoch, admitted through the back door, away from the public gaze. What did they talk about one wonders?

For a long time one doubted if it would ever be possible to elect a Prime Minister who did not meet Mr Murdoch's approval. The events of the past week now give some hope that his power at last is on the wane.

Congratulations to the Guardian who over the years has made most of the running on this story. C.P. Scott would I think be proud of it. The photo and caption at the top comes from the Financial Times.

Posted by John Tyrrell at 13:01 No comments: