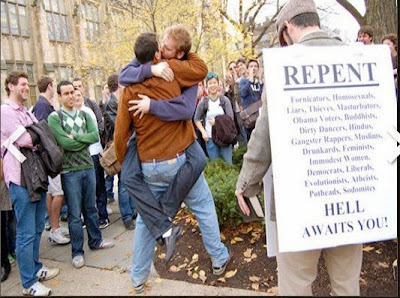 I was interested to see this fairly comprehensive list of doomed groups displayed on the back of this Christian fundamentalist protester in the United States.

Buddhists, Hindus and Muslims are apparently bound for hell. So too are Feminists, Immodest Women, Democrats, Liberals, Evolutionists, and of course Atheists, and a few other categories that I have chosen not to repeat.

This is a fascinating insight into the world view of contemporary American fundamentalist Christianity, transformed by three decades of politicisation into a rather mean spirited movement which seems to me to have little to do with the teachings of the founder of their religion, not to mention the desire of the American Founding Fathers to keep matters of faith out of the political sphere.

This is not the kind of thing I usually blog about, except that I too was brought up with a strong fear of hell's fiery furnaces, but now like Iris Dement am not so sure! The nonconformist world in which I grew up set itself apart from the "world" of money and power, represented in rural England by Parson and Squire, it was narrow-minded and at times hypocritical, but I think there was a kindliness and an absence of hatred which differentiated it from the man with the board on his back.