Munch without The Scream 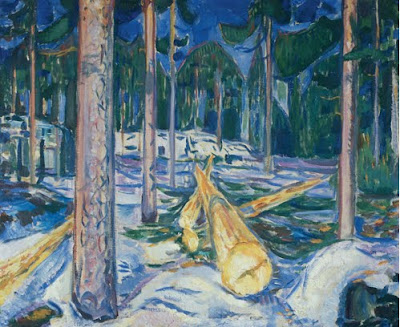 by Edvard Munch (1863-1944) is one of the best known images in art. Munch often repeated his works and painted four versions of The Scream between 1893 and 1910. One version sold in May this year for 119.9 million dollars, a record for an open auction.

There is though far more to Munch than this iconic late nineteenth century painting. Arguably it is not his best work, and it is certainly not representative of his total artistic endeavour, which continued until his death in Nazi occupied Norway in 1944.

For some reason I have never visited the Munch Museum in Oslo, and having read a review by Laura Cummings in the Observer on 1st July, I was determined to visit the exhibition Edvard Munch: The Modern Eye at the Tate Modern, now nearing its end.

The exhibition focuses on Munch's twentieth century development, and on the impact which photography and cinema had on him. I was particularly attracted by the Yellow Log, which creates an almost kinetic effect. A similar effect is apparent in The Workers Returning Home, which reflected his engagement with the trends of the early 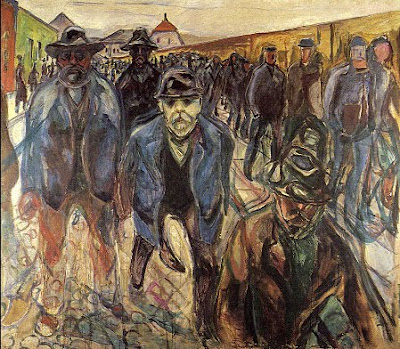 twentieth century,and his belief that the time of the workers had come. The middle class pedestrians are sidelined, mere observers of history. 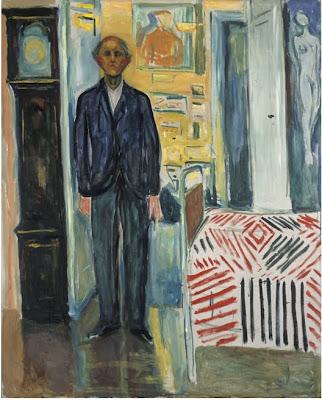 Edvard Munch: Self-Portrait: Between the Clock and the Bed 1940–3

of a number of self portraits, showing the subject standing between a grandfather clock,its face obscured, and the bed, on which presumably he expects to die, surrounded by some of his life's work. The painting was completed in 1942 or 1943. Munch died in January 1944, refusing to the end any association with the collaborationist Quisling regime in Norway which tried to convey a different impression at his funeral.

I found this a fascinating exhibition, and hope before too long to visit the Munch Museum in Oslo, to learn more about him, and yes, to look at The Scream.

Posted by John Tyrrell at 04:38 No comments: