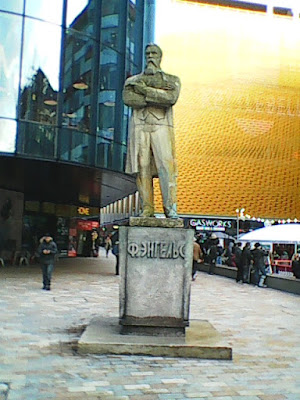 Friedrich Engels has a good claim to be one of the most famous residents of Manchester. In 1842-1844, his first period in the city, Engels researched the horrific conditions under which so many lived and wrote his Die Lage der arbeitenden Klasse in England, which greatly impressed Karl Marx whom he had not yet met. (1) During his second longer stay in the city Marx visited him a number of times.

Over a year ago in my previous post I commented that there was no memorial to either Marx or Engels in Manchester. Little did I know then that plans were underfoot to remedy this! The artist Phil Collins had retrieved a crude concrete statue of Engels from post communist Eastern Ukraine and transported it to Manchester. In the summer it was moved to Tony Wilson Place, the latter named after a more celebrated recent resident associated with the city's once highly successful popular music industry. So there it now stands, outside Home, Manchester's contemporary cultural centre, a mass produced remnant of a world whose memory has steadily been erased, artistically even more undistinguished than Manchester's statue of Abraham Lincoln. 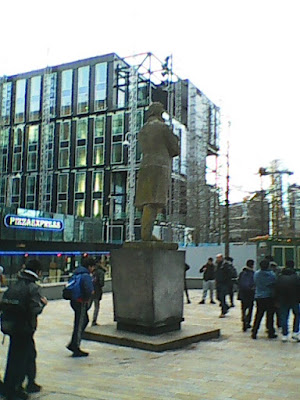 The transport of this statue from a place where it was associated with a failed social experiment and a repressive regime to a totally different social context fascinates Phil Collins. Whilst the object first of veneration and then of hatred in the former Soviet Union, it is now seemingly met largely with indifference. Engels is not part of the history which English people have been taught. Collins evidently hopes that at a time of austerity when as in Engels' day, poverty and deprivation sit closely alongside material wealth the statue will help to reconnect with Manchester's radical heritage. 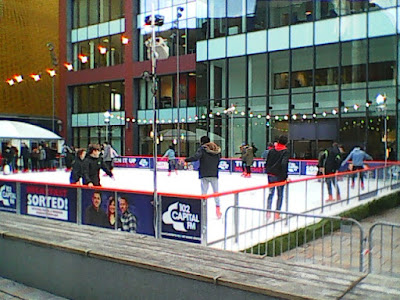 Manchester has an important place in the history of industrial capitalism, free trade, liberalism, the working class movement and Marxist socialism. In Engels' time it was at the heart of the economic developments that were transforming the world. Now, apart perhaps from its football teams, Manchester is very much on the periphery; the UK is exiting the European Union, and in any case power and focus is seemingly shifting away from Europe to the East. In a period of change and crisis in the UK, amidst talk of a "northern hub" and plans to build yet more large towers, Manchester is probably entering a period of introspection. Its political and artistic community will doubtless engage with the city's radical history as the bicentenary of Peterloo, the Manchester Massacre, approaches in 2019. It will be interesting to see whether the Engels statue in Tony Wilson Place reignites interest in that phase of Manchester's history. It seems to me that it has considerable competition from the Christmas Market, another German import, and the outdoor ice rink.
-----------------------------------------------------------
1. It was translated into English in the 1880's and published as "The Condition of the Working Class in England" in New York in 1887 and in London in 1891.