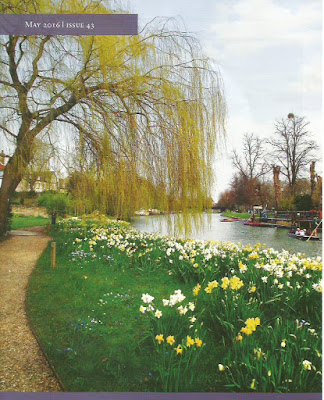 I recently received a magazine from my old College. On its front is an idyllic picture of the Cam. Inside, amongst reports on fund-raising and on improving access to what was always a rather stuffy, public school dominated place, and a piece improbably entitled "I Was Hitler's Neighbour", is an excellent article "European Integration - Realistic or Idealistic", by Mathias Haeussler.

I am old enough to remember Britain's first somewhat hesitant efforts to join what we used to call the "Common Market." We had a debate about it at my school, not many miles from the coast of what before statehood used to be called "The German Ocean". The local M.P. attended, speaking in favour of entry. He lost, and said he would report the result back to the Prime Minister, Harold Macmillan no less!

I remember making a nervous contribution to the debate, saying that everybody on both sides seemed to think that the British/English were a special people, superior of course to continentals and to former subjects of the Empire, and I begged to differ. That went down like a lead balloon.

Around the same time we had been treated to film shot at the school, its sound track featuring some patriotic Shakespeare, selected and read by a pompous boy who now sits on the Conservative benches in the House of Lords. 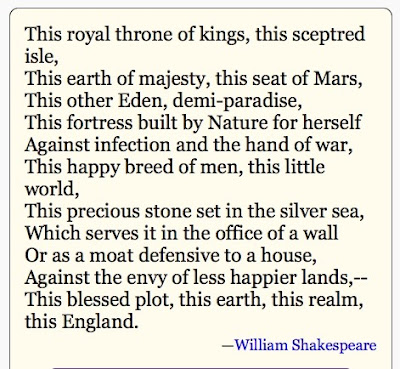 I have never been comfortable with that kind of patriotism, always wondering what place Scotland, Wales and Northern Ireland had in that scheme of things, and sympathising with that great Tory Dr Johnson's acerbic comment that patriotism is the last refuge of the scoundrel. So I have not bought the T-Shirt. 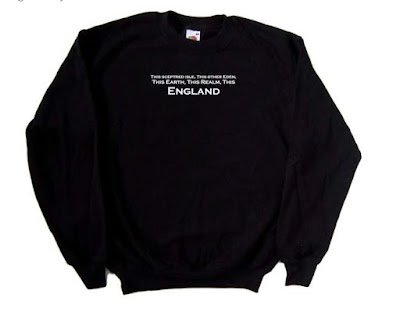 Anyway back to the article. Haeussler talks about the wide conceptual gulf between Germany and the U.K. He speaks about Germany's "unique historical burden and its central geostrategic position." For post-war Germans the European Union was the framework in which it sought rehabilitation in order to "mitigate fears of a potential revival of German power."

Britain by contrast, on the periphery of Europe, with a more global history, initially opposed the creation of the European Community. The British observer at the Messina Conference in 1955 made clear his view that the policy of creating a union would not work, and if it did the UK would do all in its power to obstruct it. So, as Haeussler explains, Britain only applied to join "to preserve its political and economic influence in light of the European Community's unexpected successes." The French leader General De Gaulle earned ridicule and opprobrium for daring to veto Britain's application for membership not once but twice. Eventually De Gaulle departed, and in 1973 the United Kingdom joined, the enduring legacy of an almost forgotten Conservative Prime Minister, Ted Heath, who within a year was out of office.

The 1975 referendum, the first ever held in the United Kingdom, was the result of an existential split in the Labour Party. The remain campaign was supported by the leaders of all the main political parties, and also the rising Tory star, Margaret Thatcher. No mention that I can recall was made in the campaign of the aims of "ever closer union" mentioned in the Treaty of Rome. Britain's governing elite well knew of the aspiration for deeper union, but believed it would never come to fruition, and in any case had a devilish plan to stop it by pushing for an expansion of membership of the community.

In the event those arguing to remain secured a convincing victory, and in subsequent years those on the left of British politics became more reconciled to what was once reviled as a "capitalist club", whilst opposition grew on the right. So here we are again, being asked to make a decision because a Prime Minister leads a party that is totally disunited over our membership.

Now as in 1975 I am turned off by both campaigns. It is hard to believe the economic scare stories of a Prime Minister who only a few months ago was claiming that if he didn't get the (minor) changes he wanted he would support a campaign to leave. It is similarly hard to take seriously an ambitious Churchillian poseur linking the idea of a European union to the aims of Hitler when a few months ago he professed to be agonising as to which side he should support. I also recoil at scaremongering about millions of Turkish citizens coming to live in Britain. 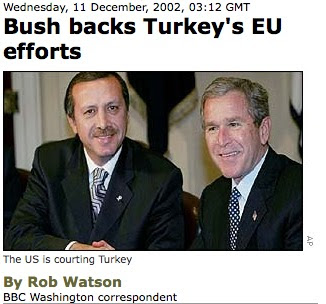 George Bush: a strong supporter of Turkey joining the EU!

It is extremely unlikely that Turkey will join the EU in the foreseeable future, but of course it is an inconvenient fact that successive British Governments have been strong supporters of Turkey's membership, and none more so than former Foreign Secretary William Hague . The reason for British support was part NATO/United States inspired, but it has to be seen in the context of the Foreign Office's 40 year long machiavellian policy of promoting expansion to make a deepening of European Union impossible.

My own feeling is that De Gaulle was right and Britain should never have been allowed into the Union. It would though be incomparably harder to leave than in 1975, because our economy is now far more integrated into that of the continent, and the world we inhabit is far more uncertain and unstable than that of 40 years ago. I am also certain that in or out, Britain has a very real interest in the future political and economic arrangements on the continent. For over 300 years, from the reign of Louis XIV in France, a constant of British Foreign Policy was the prevention of the continent's dominance by a single power, and much money was spent and blood spilled in pursuing that policy. Clearly the European Union is in a state of flux, engulfed by multiple global crises that have afflicted the world since 9/11, the post-Iraq war destabilisation of the Arab world, and the beginnings of the Great Recession in 2008. I doubt whether it would be wise for Britain to surrender all influence over this process and join Norway and Switzerland on the sidelines.

My gut feeling is that Britain will vote to remain, and I suspect that as in 1975 it will not even be close. I do not expect the referendum to settle the issue. Germany has a clear idea of its place in the heartland of Europe. It cannot seriously entertain isolationist or go it alone policies. Britain, said Dean Acheson in 1962, "has lost an Empire and not yet found a role." Over 50 years later that still remains true. Dr Haeussler concludes his article with the comment that "Whichever way the vote will go on 23 June .. it certainly won't solve Britain's problem with European integration."

40 years ago I went into the polling booth intending to vote to remain, and at the very last minute changed my mind. My young daughter saw my vote and said "I will tell Harold Wilson [the Prime Minister] about you." Her comment convinced me that I had voted the right way! Who knows what I shall do this time?

Postscript Since writing this I have come across this article by Patrick Stewart which has brought me to my senses. This time I have a postal vote, so there will be no last moment changes!