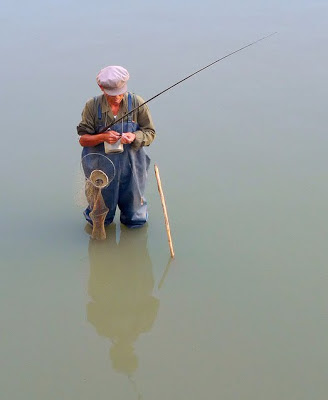 Another lunch with the globe trotting Grimshaws. I wonder how many people can have visited both Pitcairn and North Korea, let alone in the space of less than one year? That honour belongs to our friends the Grimshaws, who have posted the photos they took of their recent trip on Flickr.

I particularly liked the image of the man fishing. A superb photo taken by a gifted but very modest photographer, capturing a slice of life in North Korea which few are able to see.

Another that caught my eye was the photo of the Pyongyang Metro, modern, clean and uncrowded, claimed to be the deepest in the world, and designed to provide shelter from a nuclear attack that the Korean authorities apparently regard as inevitable. 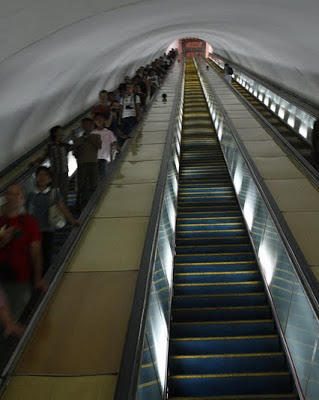 The image of people cycling to work in front of nondescript apartments chimes better with western views of this inscrutable country, albeit with a touch of Lowry about it. 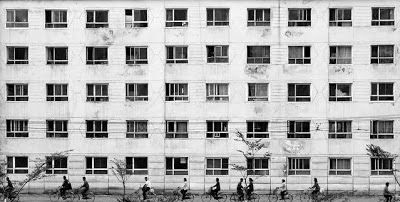 Finally I have added a view of which the authorities would approve, a huge monument to the Korean Workers Party, consisting of three 50 metre towers depicting the hammer and sickle, and in the middle a rather phallic writing brush. 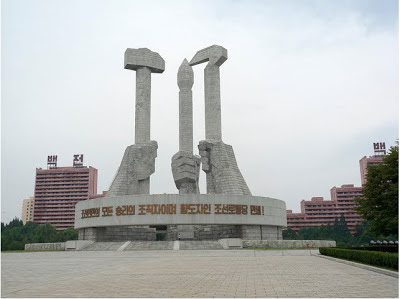 We were fascinated to hear about their travels to the Demilitarised Zone, the empty roads and their two visits to the amazing Arirang Mass Games. Surprising was the revelation that visitors may spend a short time staying in the homes of ordinary families, a privilege not extended to those American citizens who find their way to North Korea.

I was also surprised to hear that the UK has an embassy in Pyongyang. I imagine that it is not a highly sought after posting!

Perhaps most surprising of all was the account of the young Norwegian in the Grimshaws' party, fascinated by North Korea and making his third trip. One wonders how far he has managed to delve below the surface of this most impenetrable of countries. Unlike the young Norwegian the Grimshaws do not intend to make a return visit, but they had no regrets about going. I wonder where they will go next?