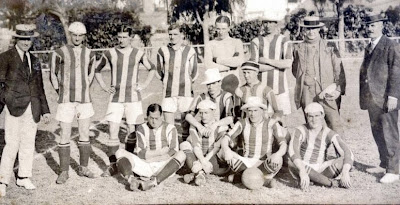 The Brazilians, hosts of this year's World Cup, have acquired a legendary status in the game since Stockholm in 1958, when players with silky skills and exotic names such as Didi and Pelé won the first of their record 5 world cup victories by defeating the Swedish hosts 5-2.

What is remarkable is that Brazil had played what is regarded as its first match only 44 years earlier, in July 1914, against Exeter City, a mid table Southern League team. This match, at the Laranjeiras stadium, Rio de Janeiro, home of Fluminense Football Club, was tagged on to the end of Exeter City's tour of Argentina. The Brazilian team played in white shirts, but for the first time the famous yellow and green colours were displayed on their sleeves. 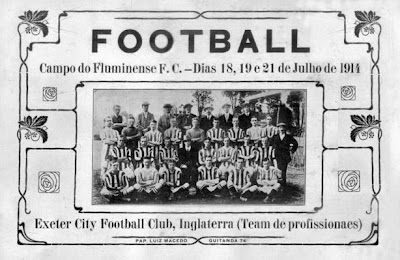 Brazilian publicity, with emphasis that Exeter was a professional team

The match was characterised in the Brazilian press as almost a David v Goliath contest, the amateurs of Brazil against a rather physical professional team from England, the home of course of Association Football. The fact that Exeter had been professional for only 6 years, and were in the lowly Southern League, was not given much attention! The result of the match seems to be a matter of some dispute, but it is generally accepted that Exeter lost. The Brazilian players were in those days of course all white, although the Exeter team had watched a team playing in junior football in Brazil whose players “were all niggers, as black as your hat, and most of them playing in bare feet”. (1)

The Exeter players returned to England as war began and never again played together as a team. Surprisingly they all survived the war, but some sustained injuries which prevented their playing again. 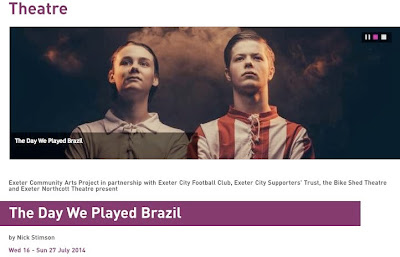 This summer, to celebrate the centenary of the match, Exeter City are sending a team to play in Brazil, and the city itself is commemorating the tour with a specially written musical production at Exeter's Northcott Theatre.