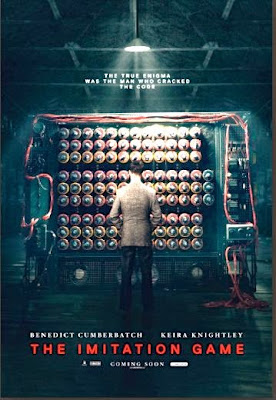 The Imitation Game, the new film about Alan Turing directed by the Norwegian director of Headhunters, Morten Tyldum, has been justifiably well reviewed. The film moves backwards and forwards between three periods in Turing's short but highly dramatic life: his unhappy period at Sherborne public school; the Manchester years, culminating in his chemical castration after a conviction for homosexuality and his untimely death; his vital World War II work as the intellectual leader of the team that cracked the German enigma codes which according to some shortened the war by two years.

Curiously enough the film doesn't really cover his work on computation before and after the war. A viewer might indeed get the false impression that the "bombe", developed from an original Polish machine designed to crack the enigma codes, was the forerunner of the universal computing machine to which Turing gave his name and for which he is justly remembered.

The film's introduction included a statement that it was "based on a true story", and I irritated my other half afterwards by ruminating about the number of occasions I spotted in which the film departed from the actual story: Turing was not actually a Professor but a Reader; the house which was broken into and in which he died was in the Cheshire countryside not Manchester; John Cairncross, the Soviet agent, was not actually a member of Turing's team in the famous Hut 8; the appeal to Churchill which saved the war-time project was made in a letter signed by four people, including Hugh Alexander who is portrayed in the film as his bitter rival at that time.

The film makes much of Turing's relationship and year long platonic engagement to Joan Clark, which Turing's biographer Andrew Hodges feels gives a false impression of Turing's sexuality. In addition the image of the Heath-Robinson type machine, Turing's bombe, used throughout the film and in the pre-publicity to create Turing's persona as the "odd Professor", does not really match the physically neater, less dramatic machine that was developed for Turing's work. 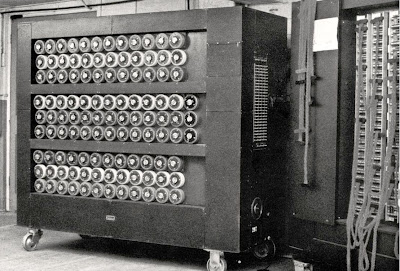 But perhaps, as Mark Kermode said in an excellent review in the Observer, the audience needs to see its wires spreading out like entrails, mapping the complexities of its creator's mind

In the credits at the end the viewer is told that Turing committed suicide a couple of years or so after the period covered by the film. That was the verdict of the Coroner, but we really do not know. Mark Kermode rightly is more circumspect about this, simply saying that Turing died in 1954 "having apparently taken a bite from a poisoned apple." Turing's mother was always convinced that his death was an accident. A prominent Manchester citizen, former Conservative local politician and brilliant Mathematician who knew Turing, maintained until the end of her life that Turing was murdered by M16. The scary security atmosphere in which Turing lived and died, in which nobody was allowed to say anything about their war-time work at Bletchley, well evoked by the film, makes her theory more understandable.

I couldn't help but reflect on the irony that the film was directed by a Norwegian. Towards the very end of his life Turing was told of dances for men only in Norway and in 1952 he holidayed there and began to study the Norwegian language. Norway turned out not to be the libertarian paradise of his imaginings, but he did meet a young Norwegian who in 1953 came to visit him in England, but after what Turing referred to somewhat obscurely as the "Kjell crisis" when allegedly police all over the North of England were searching for him, he returned to Norway without their actually meeting.(1)

Finally, in case I have given a false impression, I would thoroughly recommend this film. I think I enjoyed it even more than Mike Leigh's recently released Mr Turner, and that is saying a lot.