The House of Windsor and Appeasement 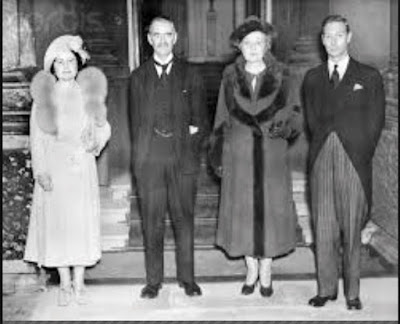 The publication by the Sun of pictures of the young Princess Elizabeth and more significantly perhaps her mother, then the Duchess of York, performing a Nazi salute in 1933-1934 in the company of Edward VIII, later Duke of Windsor, has apparently caused some consternation in the Royal Family.

Andrew Roberts pointed out some time ago that the House of Windsor has an enduring sense of insecurity. (1) Created in the first World War when its designation was changed from Saxe-Coburg and Gotha, its founder, George V was soon to witness the dethronement of his cousins the Tsar of Russia and the German Kaiser. If there was one thing that united the House of Windsor for the next two decades it was opposition to another war against Germany which it not unreasonably feared might be fatal both to the British Empire and to the Monarchy itself.

For those who take a Manichean view of history, particularly beloved by Americans, the baddies in the 1930's were Edward VIII, later Duke of Windsor, and Neville Chamberlain. The hero of the decade, with whom the Royal family, or particularly George VI and his wife, have to a large extent become associated in public memory, was Winston Churchill. The film The King's Speech helped to prolong this myth, for such it was.

Churchill, a supporter of Edward VIII in the abdication crisis, was very unpopular with the Royal Family throughout the decade. The King and Queen, contrary to conventions of political neutrality, were firm supporters of Neville Chamberlain and appeasement, and very sorry to see Winston Churchill succeed him. When Chamberlain arrived to resign in May 1940 the King said that he thought he had been treated most unfairly, and suggested that Lord Halifax should be his successor. He was most disappointed when Chamberlain disagreed. Apparently the Queen was particularly opposed to Churchill. She wrote a note to Chamberlain expressing her regret at his resignation.

I can never tell you in words how much we owe you. During these last desperate and unhappy years .. we felt safe with the knowledge that your wisdom and high purpose were there at our hand. I do want you to know how grateful we are, and I know that these feelings are shared by a great part of our people. Your broadcast was superb. My eldest daughter told me that she and Margaret Rose had listened to it with real emotion. In fact she said 'I cried Mummy'. (20)

Another happier moment on the Balcony at Buckingham Palace: with Churchill on VE day

The current storm has renewed calls for the Royal Family to open its archives to allow researchers to investigate its links with the Royal Family's German relatives in the 1930's. Clearly there is little chance of this happening for many years.