Anthony Burgess: made in Manchester 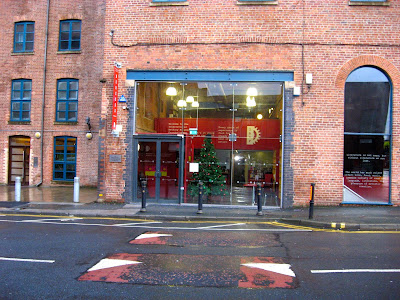 Anthony Burgess or John Anthony Burgess Wilson as he was known in his youth, has a reasonable claim to be the greatest man (or woman), and certainly the greatest writer, that Manchester has yet produced. But I suspect that whilst most Mancunians may have heard of or even have seen the film A Clockwork Orange , few know who wrote the book on which it was based, and fewer realise that he was born in Manchester. Fewer still I suspect know of the existence of the International Anthony Burgess Foundation. 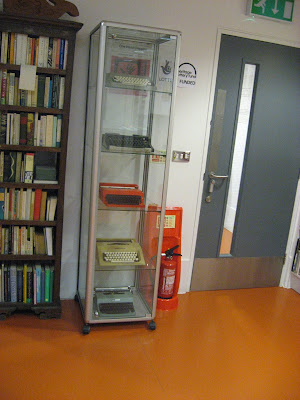 Sited in an old industrial building, off the beaten track, but close to the large student population at Manchester's two Universities, the Foundation has a small performance space, a book lined cafeteria, and houses much of the extensive collection accumulated by Anthony Burgess: books, typewriters, music, archives. Its windows display improving quotations, somehow appropriate for a city associated with nineteenth century liberalism and a belief in the perfectibility of man. 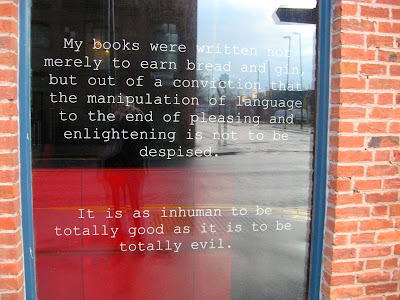 I AM PROUD to be a Mancunian Burgess wrote in his autobiography, and even claimed to have imported the word into the Italian language:

Italians do not realise that the British are honorary Romans, and, lecturing in Rome, I have declared myself a citadino mancuneinse, cioè romano.

Burgess's associations with Manchester after 1940, when he received a cordial notice of induction into His Majesty's Army, were tenuous to say the least. His mother had died during the flu pandemic shortly after his birth and, somewhat detached from his father's second family, he never returned to live in the city. After the war he taught in Birmingham and Banbury and from the 1950's spent much of his life overseas, in Malaya, Malta, Italy, the United States, the Alps and elsewhere.

At the time of my birth, Manchester was the great city, Cottonopolis, the mother of liberalism and the cradle of the entire industrial system. It had the greatest newspaper in the world, meaning the only independent one. The Manchester Guardian .. Manchester's Free Trade Hall housed the Hallé Orchestra, one of the finest in Europe .. Manchester was encircled by fine colliery brass bands and beefy choirs, and its musical acumen, of which Ernest Newman and later Neville Cardus were the critical voices, far surpassed that of London. Its cosmpolitan musical taste was kept sharp by the Italian and German Jewish colonies. It was, under Miss Horniman, the focus of a theatrical renascence that learned from Ibsen but expressed, in plays like Hobson's Choice and Hindle Wakes, the Lancashire soul. (1)

Despite his international success, Burgess never lost his northern prejudice against the south and the Oxbridge dominated establishment: the Manchester Guardian debased itself when it moved to London and was turned into an irritable rag dedicated, through a fog of regular typographical errors that would have appalled C.P. Scott, to the wrong kind of radicalism and the BBC stole the Hallé's best players. (2) 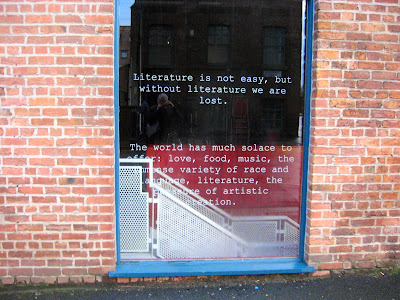 One might have imagined that he would at last have found a heroine in Margaret Thatcher: from a similar social background, she presumably stood for the "right kind" of radicalism, and despite a Methodist rather than Catholic upbringing, perhaps shared his strong sense of original sin. She and Burgess certainly shared an aversion to high taxes, which he avoided by living abroad, but alas her credo was too philistine for his tastes:

Some things cannot be considered in terms of a market economy, and the chief of these things is education … The ruling philosophy is utilitarian. Education is of little value unless, directly or indirectly, it leads to the expansion of the Gross National Product. Of what use is the study of history, philosophy, archaeology? … Mrs. Thatcher presumably sees no use in the teaching of moral values. There is little evidence in contemporary British life that it is considered better to help the sick and suffering than to kick them in the face.(3) 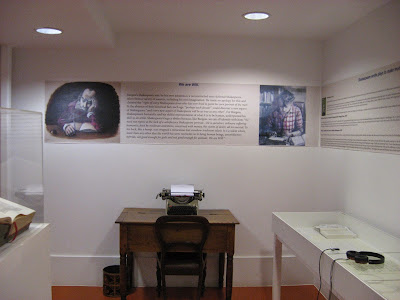 Shakespeare exhibition at the Burgess Foundation
A polymath and a man of eclectic tastes, Burgess had an obsession with language and music, and a profound knowledge and appreciation of Shakespeare, Beethoven and James Joyce. Arguably he spread himself far too thinly, insisting on regarding himself as a composer despite all the evidence to the contrary, and producing too much and too varied a range of fiction, not to mention the numerous critical and non-fictional studies.