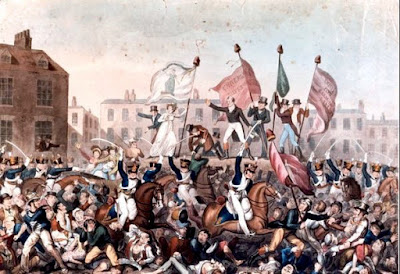 As we approach the bicentenary of Peterloo, it is surprising how relatively few people in the UK know anything about it. History is written by the victors, or perhaps as George Orwell more sinisterly put it,

Trafalgar, Waterloo and The Great Reform Bill are uncontroversially remembered, but Peterloo is not a part of our accepted national story.

A basic summary of the events of August 16th 1819:- A mass meeting of some 50,000 men, women and children, campaigning for universal suffrage, met in Manchester to hear the radical politician, Henry "Orator" Hunt. The local magistrates gave the order to arrest Hunt, the Manchester Yeomanry charged into the crowd, killing a child, and then the 15th Hussars were ordered to disperse them. 18 people were killed, and around 700 injured. Hunt and nine others were in 1820 tried in York on a charge of conspiracy to overthrow the Government. They were convicted on a lesser charge and imprisoned. Hunt got the longest term, serving a sentence of two and a half years.

Peterloo was followed by a period of suppression, which in the eyes of many became associated with the victor of Waterloo and later Tory Prime Minister, the Duke of Wellington. When the latter made his only appearance in Manchester over ten years later, to attend the opening of the Manchester Liverpool railway, he was roundly booed and soon left. 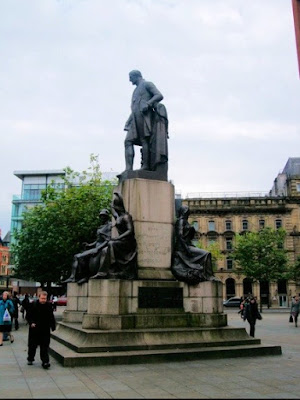 Statue of the Duke of Wellington,1856

A statue of Wellington now stands in Piccadilly Gardens, and there are many other reminders of him and Waterloo on streets throughout Greater Manchester. The memorial to Henry Hunt has long since disappeared!

The term Peterloo, an ironic reference to the “killing fields of Waterloo” was quickly adopted by radicals. Some have associated this with the betrayal and disillusion of many soldiers who faced exceptionally hard times after the war with France, and indeed among Peterloo's victims was one Waterloo veteran, John Lees. This explanation seems to ignore the climate of opinion amongst radicals and a number of Whigs in 1815 and after. Whilst the victory at Waterloo became a staple of Tory propaganda before the dust had even settled on the battlefield, the celebration was not shared by their political opponents, many of whom had publicly opposed the resumption of war against Napoleon in 1815. As one Loyalist newspaper explained to its readers, Waterloo was “a great offence in the opinion of Reformers.”

Talk of Waterloo was much in the air in the months before the Manchester Massacre. It is to be found in the poems of Samuel Bamford, one of the local radical leaders imprisoned after Peterloo, and it became the focal point of a speech by the radical leader Sir Charles Wolseley who predicted that Sandy Brow in Stockport would be more famous than Waterloo. On his first visit to Manchester in January 1819, outside a theatre that had been closed to prevent his attendance, Henry Hunt somewhat prophetically urged his followers to "be peaceable, lest you should draw down upon you the BLOODY BUTCHERS OF WATERLOO." In Court a few days later Hunt said he was actually speaking ironically, "I thought them more like Lambs. "


In Manchester a number of events have been organised to commemorate the massacre. I recently attended a talk by Professor Robert Poole, whose new book has just appeared. 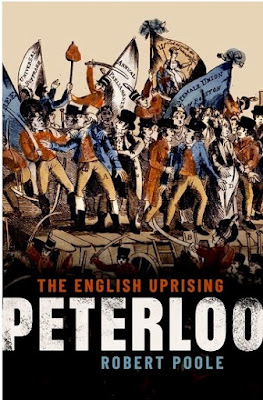 In his talk Professor Poole gave a fascinating insight into Regency Manchester. A town with a fiercely Loyal tradition, with some adherence to the Stuart cause lingering well into the eighteenth century, run by a close knit oligarchy centred in the magistracy, the Anglican church and the military. There had been Loyalist riots in Manchester in the 1790's, there were frequent burnings of effigies of Tom Paine, and the first Orange Lodges in England were to be found there. Manchester Pitt Club, founded in 1812 was a centre of Loyalism and had about 400 members committed to

resist the arms of France .. To check the Contagion of Opinion, To array the loyal, the sober-minded and the good in defence of the venerable Constitution of the British Monarchy." (1) 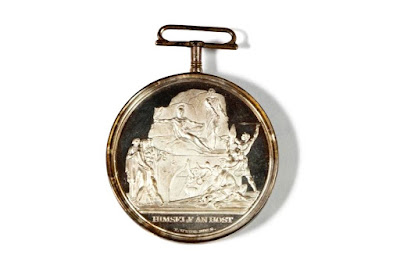 Manchester Pitt Club Medal 1813
Faced with a growing industrial population outside the reach of parson and squire the local rulers made use of a large number of spies to maintain control. In 1817 they created the Manchester Yeomanry, and by 1819 Manchester had according to Professor Poole become a "garrison town."


I also obtained a copy of a graphic novel co-authored by Professor Poole which I found surprisingly effective at putting over the basic story and allowing the reader to access the atmosphere of the period. The words are all original, the pictures obviously are not. 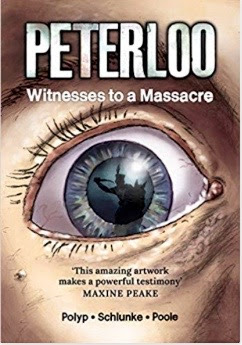 In many ways it is more effective than Mike Leigh's recent film. You can click on the image below to read what the characters were saying. 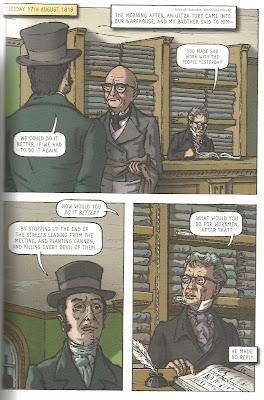