All My Sons: The Talawa Production at the Royal Exchange 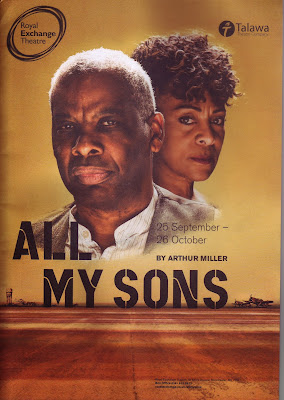 I have just managed to catch The Talawa Theatre Company's Production of Arthur Miller's "All My Sons", now nearing the end of a very successful run at Manchester's Royal Exchange. Performed by an all Black cast, with the wonderful Don Warrington playing the lead role of Joe Keller, it was an engaging and powerful performance from start to finish.

The Talawa Theatre Company, founded as long ago as 1986 to provide creative opportunities for Black performers and directors, is now Britain's primary all Black theatre company. There is no special ethnic reason for the production of "All My Sons" by an all Black Company, its themes are universal: individual responsibility, conscience, and the relations of individuals and families to society in the large. Set in the latter part of the second world war, the play portrays the disintegration of a family amidst the sacrifice the profiteering and the criminality which coexist in modern war.

As always the Royal Exchange's Theatre programme is thought provoking, and this one carries a piece written by Arthur Miller in 1958 in which he acknowledged his debt to Ibsen,

If his plays, and his method, do nothing else they reveal the evolutionary quality of life. One is constantly aware in watching his plays, of process, change, development. .. dramatic characters and the drama itself, can never hope to attain a maximum degree of consciousness unless they contain a viable unveiling of the contrast between past and present, and an awareness of the process by which the present has become what it is.

Elsewhere in the programme Don Warrington and Director Michael Buffong explore the play's relevance to the the present, to the collapse of "turbo capitalism" and the need to find a way of living together that is not based on pure greed. "All My Sons' was written at a time when free market economics and individualism were widely considered to be an extreme ideology responsible for the pre-war economic breakdown which led to mass unemployment, fascism and to war. It was a time when many shared a belief that it was possible, out of the ruins of war, to create a better, more socially responsible world. I don't detect such optimism now, simply a cynicism about the politicians' demonstrably absurd claims that "we are all in it together," but that perhaps makes Miller's play even more relevant.

Anyway I hope this production is staged elsewhere, it deserves to be seen by a wider audience. I also rather selfishly hope that the Talawa soon return to the Royal Exchange.