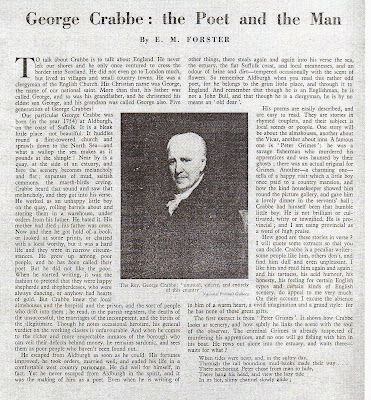 The Listener, 29 May 1941
This blog consisting solely of an article by E.M. Forster has been posted to accompany a blog on George Crabbe and Benjamin Britten. Britten read this article whilst living in the United States in 1941 and as a result decided to return home to the Suffolk Coast, and to write his first major Opera, Peter Grimes , about the character created by Crabbe. I also think it is superb writing, originally of course delivered as a radio broadcast during the dark days of 1941. That ever present sense of peril, "when England stood alone", and the word "England" itself was virtually synonymous with Britain, would of course have affected Forster's listeners, and those who like Benjamin Britten read the printed version.

To talk about Crabbe is to talk about England. He never left our shores and he only once ventured to cross the border into Scotland. He did not even go to London much, but lived in villages and small country towns. He was a clergyman of the English Church. His Christian name was George, the name of our national saint. More than that, his father was called George, and so was his grandfather, and he christened his eldest son George, and his grandson was called George also. Five generations of George Crabbes!

Our particular George Crabbe was born (in the year 1754) at Aldburgh, on the coast of Suffolk. It is a bleak little place: not beautiful. It huddles round a flint-towered church and sprawls down to the North Sea -- and what a wallop the sea makes as it pounds at the shingle! Near by is a quay, at the side of an estuary, and here the scenery becomes melancholy and flat; expanses of mud, saltish commons, the marsh-birds crying. Crabbe heard that sound and saw that melancholy, and they got into his verse. He worked as an unhappy little boy on the quay, rolling barrels about, and storing them in a warehouse, under orders from his father. He hated it. His mother had died ; his father was cross. Now and then he got hold of a book, or looked at some prints, or chatted with a local worthy, but it was a hard life and they were in narrow circumstances. He grew up among poor people, and he has been called their poet. But he did not like the poor. When he started writing, it was the fashion to pretend that they were happy shepherds and shepherdesses, who were always dancing, or anyhow had hearts of gold. But Crabbe knew the local almshouses and the hospital and the prison, and the sort of people who drift into them; he read, in the parish registers, the deaths of the unsuccessful, the marriages of the incompetent, and the births of the illegitimate. Though he notes occasional heroism, his general verdict on the working classes is unfavourable. And when he comes to the richer and more respectable inmates of the borough who can veil their defects behind money, he remains sardonic, and sees them as poor people who haven't been found out.

He escaped from Aldburgh as soon as he could. His fortunes improved, he took orders, married well, and ended his life in a comfortable west country parsonage. He did well for himself, in fact. Yet he never escaped from Aldburgh in the spirit, and it was the making of him as a poet. Even when he is writing of other things, there steals again and again into his verse the sea, the estuary, the flat Suffolk coast, and local meannesses, and an odour of brine and dirt --tempered occasionally with the scent of flowers. So remember Aldburgh when you read this rather odd poet, for he belongs to the grim little place and through it to England. And remember that though he is an Englishman, he is not a John Bull, and that though he is a clergyman, he is by no means an 'old dear'.

His poems are easily described, and are easy to read. They are stories in rhymed couplets, and their subject is local scenes or people. One story will be about the almshouses. another about the Vicar, another about inns. A famous one is 'Peter Grimes': he was a savage fisherman who murdered his apprentices and was haunted by their ghosts; there was an actual original for Grimes. Another -- a charming one -- tells of a happy visit which a little boy once paid to a country mansion, and how the kind housekeeper showed him round the picture gallery, and gave him a lovely dinner in the servants' hall; Crabbe had himself been that humble little boy. He is not brilliant or cultivated, witty or townified. He is a provincial; and I am using provincial as a word of high praise.

How good are these stories in verse? I will quote some extracts so that you can decide, Crabbe is a peculiar writer: some people like him, others don't, and find him dull and unpleasant. I like him and read him again and again; and his tartness, his acid humour, his honesty, his feeling for certain English types and certain kinds of English scenery, do appeal to me very much. On their account I excuse the absence in him of a warm heart, a vivid imagination and a grand style: for he has none of those great gifts.

The first extract is from 'Peter Grimes', it shows how Crabbe looks at scenery, and how subtly be links the scene with the soul of the observer. The criminal Grimes is already suspected of murdering his apprentices, and no one will go fishing with him in his boat. He rows out alone into the estuary. and waits there -- waits for what?

How quiet this writing is: you might say how dreary. Yet how sure is his touch; and how vivid that estuary near Aldburgh.

Not great poetry, by any means, but it convinces me that Crabbe and Peter Grimes and myself do stop beside an opening sluice, and that we are looking at an actual English tideway, and not at some vague vast imaginary waterfall, which crashes from nowhere to nowhere.

My next quotation is a lighter one. It comes from his rather malicious poem about the Vicar of the Parish 'whose constant care was no man to offend'. He begins with a sympathetic description of Aldburgh church, and its lichen-encrusted tower and now he turns with less sympathy, to the church's recent incumbent. Listen to his cruel account of the Vicar's one and only love affair. He had been attracted to a young lady who lived with her mother; he called on them constantly, smiling all the time, but never saying what he was after; with the inevitable result that the damsel got tired of her 'tortoise', and gave her hand to a more ardent suitor. Thus ended the Vicar's sole excursion into the realm of passion.

He was always 'cheerful and in season gay', he gave the ladies presents of flowers from his garden with mottoes attached ; he was fond of fishing, he organised charades, he valued friendship, but was not prepared to risk anything for it. One thing did upset him, and that was innovation; if the Vicar discerned anything new, on either the theological or the social horizon, he grew hot, it was the only time he did get hot.

The Vicar's fault is his weakness, and the analysis and censure of weakness is a speciality of Crabbe's. His characters postpone marriage until passion has died ; perhaps this was his own case, and why he was so bitter about it. Or they marry and passion dies because they are too trivial to sustain it. Or they drift into vice, and do even that too late, so that they are too old to relish the lustiness of sin. Or like the Vicar they keep, to the straight path because vice is more arduous than virtue. To all of them, and to their weaknesses, Crabbe extends, a little pity, a little contempt, a little cynicism, and a much larger portion of reproof. The bitterness of his early experiences has eaten into his soul, and he does not love the human race, though he does not denounce it, nor despair of its ultimate redemption.

But we must get back to the Vicar, who is awaiting his final epitaph in some anxiety

For the Vicar died as a child, who retains his innocence because he has never gained any experience.

Well, the above quotations from Peter Grimes and from the Vicar, one about scenery, the other about character, should be enough for you to find out whether you have any taste for the story-poems of George Crabbe. Do not expect too much. He is not one of our great poets. But he is unusual, he is sincere, and he is entirely of this country. There is one other merit attaching to him. The George Crabbe who was his son wrote his life, and it is one of the best biographies in our language, and gives a wonderful picture of provincial England at the close of the eighteenth century and the beginning of the nineteenth. Even if you are not attracted as much as I am by Crabbe's poetry, you may like to get hold of his life, and read how the poor little boy who rolled barrels on the quay at Aldburgh made good.