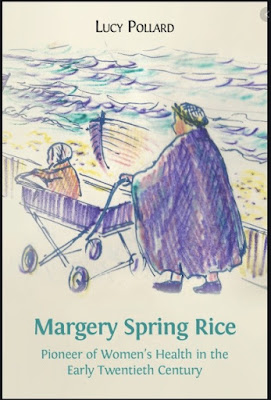 This book, written by her granddaughter from family letters, tells the story of Margery Spring Rice (1887-1970), a remarkable woman who lived a full, at times sad, and certainly a rather unconventional life.(1) Reading it has brought back many childhood memories of Iken, a tiny village on the Alde Estuary close to the Suffolk coast, where Mrs Spring Rice lived from 1936 until 1956. During that time she continued her women's health and family planning work in London and became involved in various music activities in Suffolk including the Aldeburgh Festival. 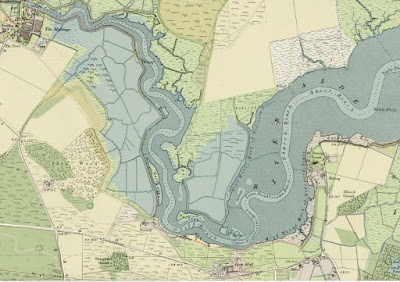 Born and brought up in an upper middle class family in London, she was a member of the Garrett family, leading agricultural engineers and entrepreneurs in nineteenth century Leiston and Aldeburgh. Her grandfather Newson Garrett (1812-1893) founded Snape Maltings, now the home of the Aldeburgh Festival. 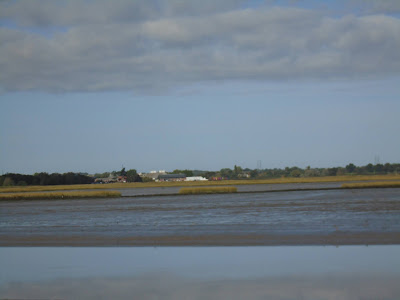 The Garrett family produced able, strong women, and Mrs Spring Rice certainly had a number of inspiring role models most notably her godmother Elizabeth Garrett Anderson, the first woman in Britain to qualify as a physician and a surgeon.

Having gone through what she describes as a "sometimes-uncomfortable journey", Lucy Pollard provides a very frank account of her grandmother's life. What emerges is a picture of a forceful, highly intelligent, cultured, politically and socially aware woman from a family which by and large valued such qualities in its women.

Margery lost her faith as a young adult, and after a brief flirtation with socialism in her teens became actively involved in Liberal politics and the League of Nations Society, of which she became its first secretary. All her life, whilst not an outright pacifist, she had a strong distaste for war and militarism. After the death of her brother Harry in the Great War she wrote of "the uselessness of all this sacrifice of life." In July 1916 her husband, serving with the Warwickshire Regiment, was killed for a cause in which like her he did not believe. These events as well as the death of her one year old daughter just before the war are chronicled in a chapter entitled simply "Loss", which also provides an account of her and her husband's astonishing experiences in trying to get out of Germany in 1914 after the war had begun.

After all the family tragedy she launched herself into work, quickly remarried because she felt her two young sons needed a father, and had two more children. This was not a wise move, but one which many women took in a world in which men were in short supply. Dominick Spring Rice, the nephew of Britain's wartime Ambassador to the United States, had a drinking problem, was according to his granddaughter a sadomasochist, and a disastrous parent to the two boys who had lost their father.

Mrs Spring Rice was perhaps not untypical of women of her class and generation in her attitudes to feminism, pacifism and sexuality and in her commitment to improving the lot of those less fortunate than herself, nor perhaps in her rather detached approach to child-rearing. 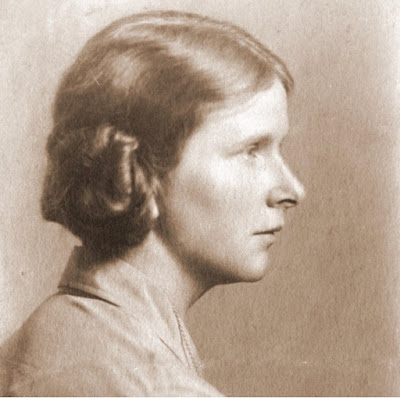 Not much of the Garrett or Spring Rice wealth seems to have percolated down to Margery, but with the aid of scholarships all her four children were educated privately: two sons who both became Communists were educated at Rugby, the third son at Eton, and the daugher at Wycombe Abbey. Lucy Pollard comments that she loved her children, but never let their presence interfere with her activities.


The book understandably focuses a great deal on the family, but almost equally influential must have been Margery's experience at Cambridge where women students were very much second class citizens, not able to take degrees until 1948. Here she encountered an intellectual world far removed from her Suffolk hinterland and made new friends, among them the distinguished medieval historian Eileen Power. Well connected and cherishing the many distinguished people who crossed her path, including Charlie Chaplin whom she met on a lecture tour in the United States in 1930, Margery was we learn a bit of a snob.

In reading the book I kept being reminded of Bloomsbury, a privileged world of strong egos, fluid relationships, chaotic and unconventional lifestyles and a desire to change the world for the better. It is somehow not surprising to find the recently widowed Margery appear thinly disguised in a novel If all these young men by long forgotten author Romer Wilson, about a group of young people living through the Great War, "which drained the vitality of all those who did not go out to it." (2) 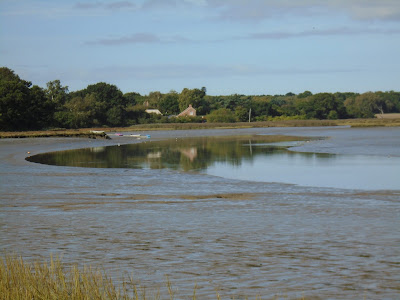 So Amaryllis, the character apparently modelled on Margery, does not entirely satisfy her future husband. She is in his eyes a country woman, with a "fat short body .. golden hair ", and he liked her best "when she was closest to nature, rough, matter-of-fact, and solid," and because she was older, he rather ominously held her "responsible for everything that may happen between us." (3) We get only an external view of her though. What goes on in Ameryllis's head doesn't seem to interest the author. 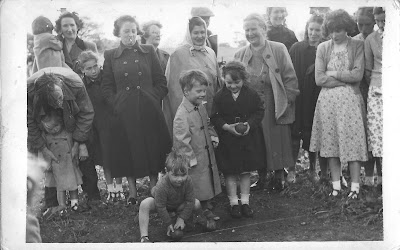 From my childhood I remember her as a very self assured, somewhat imperious woman living at Iken Hall and driving around in a rather battered old Land Rover. She belonged to a world of which I had no conception and and at that age no curiosity. She was reputed to be very left wing, even a Communist!(4) I remember a group of children from the village once attending a Christmas Party at the Hall where we were treated to a convincing performance by members of her family involving a magic carpet. I also remember being deputed by a group of boys to ask her if we could borrow her rowing boat. Quite rightly she refused, telling me that she had been in touch with my father, which I doubt, and he had told her I couldn't swim, which was probably true! 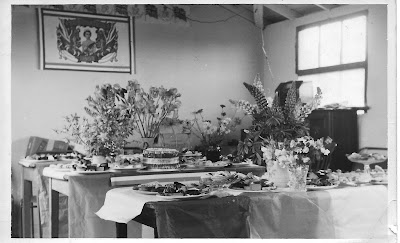 Coronation celebrations in the soon to be demolished old village hall

The most surprising thing I learned from the book was of Mrs Spring Rice's friendship with Benjamin Britten, who after his return from the United States lived nearby in the Old Mill at Snape. I knew that Iken Hall featured in a couple of works by Britten, but had never made the association and hadn't realised she was involved in the founding of the Aldeburgh Festival. It seems fitting that the festival is now located in the building designed and built by her grandfather at Snape. 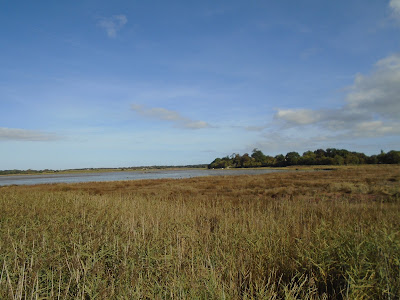 The book provides an amusing account of an encounter between Mrs Spring Rice and Benjamin Britten with Gabriel Clark, the post-war owner of the Anchorage, the former rectory next to Iken church. The latter ultimately succeeded in closing a right of way along the Alde to the Church which Mrs Spring Rice and associates valiantly tried to keep open.

Ben Britten, Ursula Nettleship & I did the ‘grind’ again last Sunday! Clarke [sic] met us at the fallen tree & after the usual sort of ding-dong argument backwards & forwards he became extremely rude to me, saying it was well known that I ought to be in trousers, & that he sympathised with my husband having left me etc. etc. Ben was so angry that there was nearly a fight. Clarke threatened to use violence if we went on, — but I ignored him & we went on, & he merely followed us hurling abuse at us, of the above sort.

Mr Clark was not the most popular person in the village, and the rumours that a person or persons had been paid to lie about that right of way even reached my young ears. 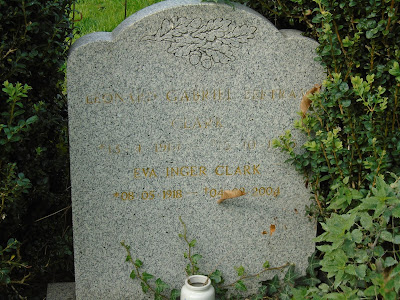 I couldn't resist including this long quotation from the book, attributed to an Etonian friend of Mrs Spring Rice's son Stephen.

Then I met Margery Spring Rice, mother of my friend Stephen. She was short and round like Mrs Tiggywinkle, but certainly no domestic drudge. She came down to Eton in a battered old Riley amid the Rolls and Bentleys, in an old overcoat done up with string as a belt […] In my first meeting with her at Eton she said in a very loud voice ‘I hear you are trying to resign from the OTC. Congratulations: I hope you succeed.’ I loved her from that moment; she was my first adult ally […] But her support did me little good at Eton. They thought her a wicked woman because of her advocacy of birth control, and because she was trying to divorce her husband, an Old Etonian and brother of the writer of ‘I vow to thee my country’ and who had turned Catholic in order to thwart the divorce. The MIC [Master in College] even wrote to my father, warning of her influence over me, with dark hints of subversion, atheism and sexual perversion. She threatened to sue him, but as it was only a private letter and not published she was dissuaded by her lawyers: a pity, for it could have made a great cause celebre. ... Margy Spring-Rice put the fire back in my belly and I fought the good fight against the OTC with renewed vigour. (5)

Sadly the fates had not finished with Mrs Spring Rice. Early in the war one of her daughters in law was drowned at Iken in mysterious circumstances, and then in late 1942 her son Stephen was killed when his submarine was depth charged by the Italian navy off Malta, but she soldiered on, maintaining a nursery for young evacuees at Iken Hall for the duration of the war. (6)

Finally, since this book has triggered so many memories, I debated for a long time as to whether to include the most embarrassing photo in my family collection. It offers a glimpse of life almost 70 years ago in a village which is now almost exclusively the preserve of second homeowners, and whenever I visit seems completely deserted. Iken Hall too seems to have disappeared, but I always find plenty of familiar names in the churchyard. 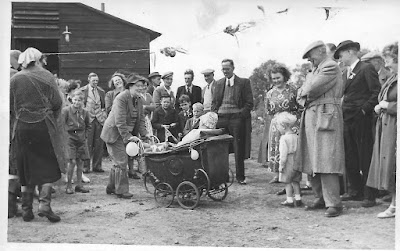 1953 - the Tyrrells in fancy dress - how embarrassing was that!

NOTE - clicking on the photos provides a larger,clearer image.
---------------------------------------------------------
1. Lucy Pollard, Margery Spring Rice: Pioneer of Womens Health in the Early Twentieth Century Open Book Publishers 2020.
2. Romer Wilson, If all these young men (London 1919) p. 125. The book was published in the year that Margey and Dominic Spring Rice married.
3. Romer Wilson pp 127, 133.
4. Iken Hall was part of what remained the Sudbourne Hall estate when Mrs Spring Rice began to rent it in 1936. In the early twentieth century Sudbourne Hall had been the childhood home of Kenneth Clark. Mrs Spring Rice was one of a few people who lived on the banks of the Alde estuary and were allowed to remain throughout the second world war when the area was used as a battle training area. After the war the tenant farmers never returned, and most of the Iken estate, some 1500 acres, was purchased by James Mann, who became Mrs Spring Rice's new landlord. He used to ride round the village slowly in his Jaguar. He was the brother in law of Henry Fulcher, the owner of Poplar Farm.
5.Anthony Gillingham, Young Rebel: Memoirs 1917–39 (privately printed, 2007), p. 50 - quoted in Lucy Pollard, chapter 6. Dominic Spring Rice was the nephew not the brother of Sir Cecil Spring Rice.
6. After the drowning, her sister in law wrote, "Douglas always speaks of you when your troubles come as ‘My dear old war-horse of a sister’, and like a tried war-horse your wounds heal and you go forth to battle again to bring home once more some wounded warrior."
Posted by John Tyrrell at 11:15